I want to thank all of you who supported the audiobook version of Quest for the Three Books after it came out last week. Thank you! I was absolutely amazed at the response.

I did finish the audio for I’m with Cupid and I’ve started recording For Sale, Call Loki, so I’ll be editing that starting this week. I’m with Cupid ended up being very short — of course, it is a short story — and comes in just under 28 minutes long.

I’m making the change from recording and doing preliminary edits in Audacity to working completely in Adobe Audition. That’s been a little bit of a learning curve, but not too bad since I’ve been editing and mastering with Audition for several months now. I’m excited about the possibilities this brings me, even though it’s a complete reworking of my process.

It’s been a diligent week of writing too, as you’ll see in the numbers below. Stonecharmer has just blown away the word count this week because it’s flowing so well. The wall that I’m facing with nearly everything else is not enough time to “edit.” I need to put things in order so I know where I’m at. I feel like I have pieces of stories which are all out of place. I’m going to have to get some thing done so that I can continued with several stories. I seem to be stuck on an ever growing number just because I need a moment to get things straightened out. I’m hoping to get have a chance this week.

I think I’ve also encountered a large bush of an obstacle with The Missing Thread (Sacred Knight #5). It’s nothing too major, but still something I need to hack out of my path. I’m at that point where it doesn’t feel right. It felt right when I started and I do believe it is where I need my character’s too be, but there’s just a little tingling at the back of my skull that tells me it’s not the story’s true path. I trust the process enough to know that I need to go back and get on track.

My son, Adrian, and I went to the Boise Comic Arts Festival on Saturday. It was great to meet up with several authors and artists I’ve been able to get to know at many cons over the years. Such amazing talent. It’s fun to vend at these shows, but sometimes it’s also nice to go as just a guest too. That’s what I did this time.

Even sat out in the afternoon sun to watch a wonderful play put on by the Treasure Valley Avengers. 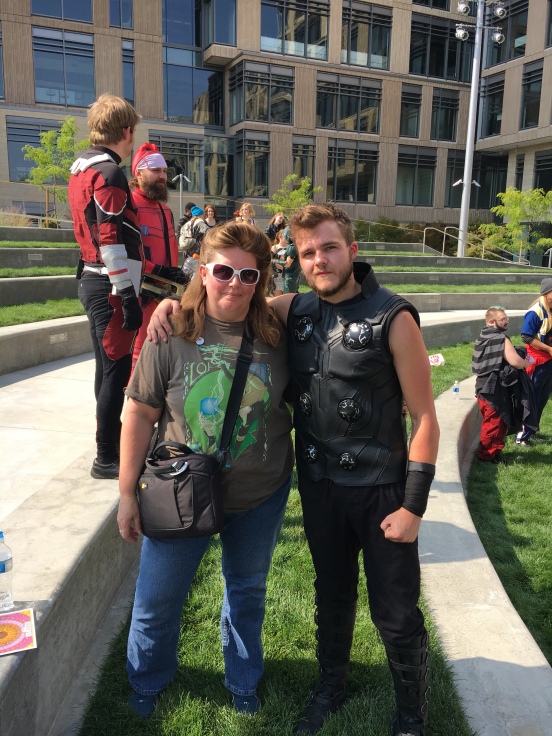 Here’s me with Thor after they won the day. Unfortunately, his brother had decided to stay inside the Soul Stone (What! Loki would never do that! Not unless he’s going to make all those souls, “Kneel!”) and so I couldn’t get a picture with him. Better luck next time.

Well, I still have much to be doing this evening as I’m writing this, so I think it’s time to take you to see the numbers for this week.