And now for the installment of my Inktober drawings since last Thursday.

Okay, the world is just too cruel. I hate the horrible things we do to each other (for crap’s sake, people, we are all humans born in the same way and all stuck on this bloody rock together!), the animals, and the world (this bloody rock floating through the dangers of space!). I just couldn’t bring myself to think about cruelty. I’d rather do that in my fiction. Is that strange? Oh, well. So, I decided on a basket of flowers.

Obviously, though, I couldn’t get completely away from thinking about how cruel villains can be — note the apple and think of Snow White.

See? Evil and cruelty — we need to be nicer to each other. 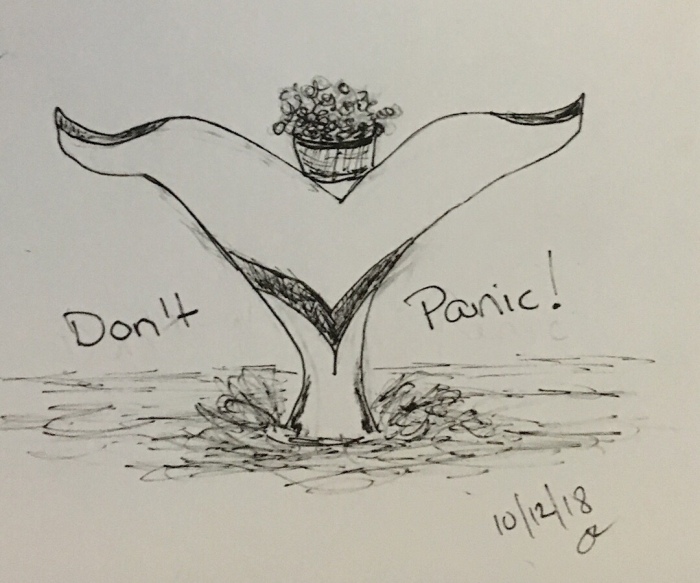 Well, here’s a whale of tale. I married my “high school sweetheart.” Looking back, I see now that I was much more in love with love and the image of who I thought he was than what he really was. We had two beautiful kids together. But I’m glad to this day that he left and made my family a functional three-piece family rather than a dysfunctional four-piece family. However, there were still some good times that I don’t regret. One of those things was him introducing me to literature I probably wouldn’t have read otherwise, namely Douglas Adams’ Hitchhiker’s Guide to the Galaxy and Ray Bradbury’s Fahrenheit 451.

So, this honors those memories.

My dog, Merlin, is always on guard. He’s a little rat terrier, possibly chihuahua breed mixed with some shepherd and who knows what else. He’s a true mutt. His poor little brain only knows two things: survive and protect. So he got to guard his bone today. Love that little guy. 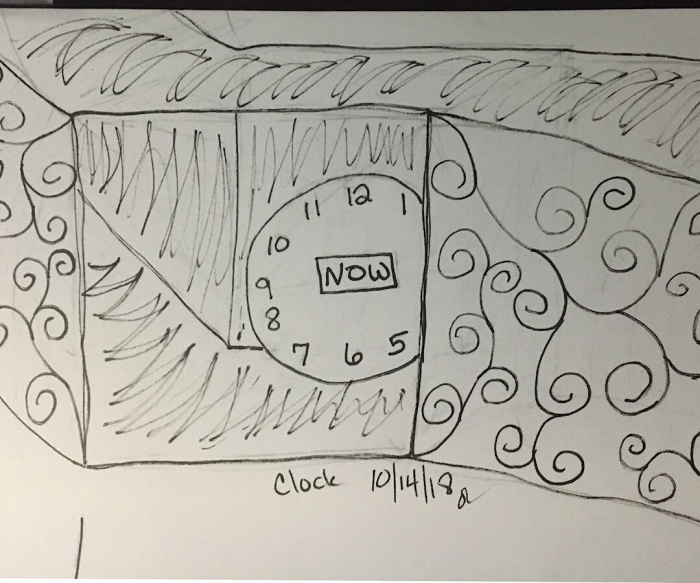 If you’ve seen my posts on Twitter lately, you know that I’ve been listening to two audiobooks: Solve for Happy by Mo Gawdat and Real Magic Dean Radin, PhD. In Real Magic, Radin talks about how things can actually flow backwards in time and how our concept of time is flawed. Gawdat on the other hand says that there are actually two constructs of time: the actual pinpoint of time and space and the man-made construct of time which we base clocks and calendars on. Okay, I am horribly paraphrasing here, but it was very interesting to listen to these two concepts in practically the same week (I bounce between listening to whatever I feel like — kind of like my writing). I do think that Gawdat is right that there are two flows of time, which I was trying to illustrate with my drawing. There is a conduit through which all Time flows, but I do agree with Radin that I don’t think Time only lows in one direction. I think we have bound only part of what could be considered Time with our lowly constructs which we think of as time and represent with calendars, clocks, dates, etc. It gives us markers. It gives us a basis for communication, a ground level, so to speak. But it is merely a net with a lot of holes. I believe that true Time is far beyond our comprehension. Of course, if we’d quit being cruel to each other and focus that energy into helping all of us, maybe we would actually get somewhere.

One other point that Gawdat makes rather sharply is that no matter what, whether your thoughts are tuned to the past or present, the inescapable reality is that you are always in the NOW. The time it took you to read that last sentence puts you in a new present moment, now.  And so forth. This, I feel, is why we can’t ever understand, on a level that we need to be aware of, about true Time. We are stuck in now. The rest of the conduit blazes around us, but we are the clock stuck in now.

That was my concept for that picture. 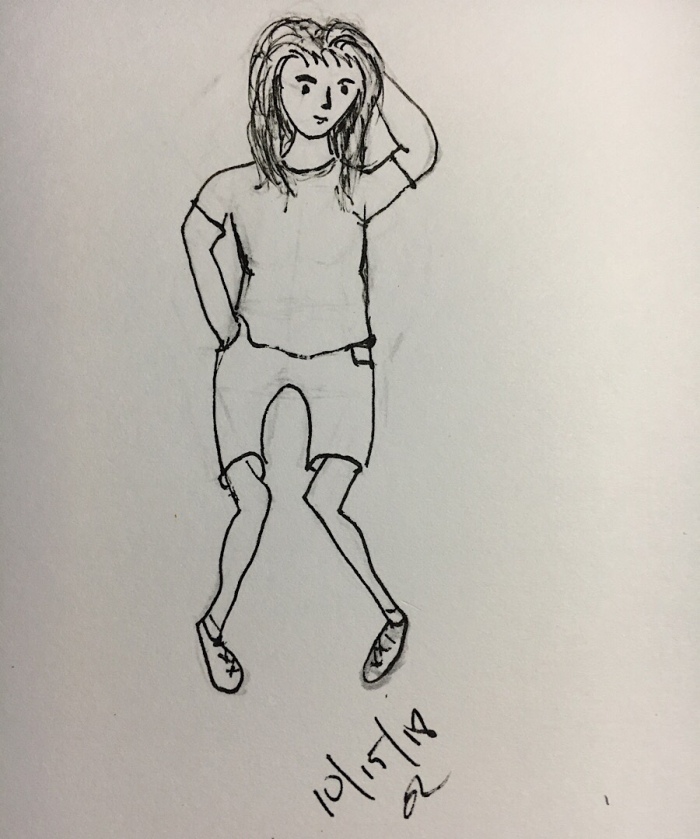 While this prompt didn’t bug me nearly as much as cruel did, I can’t say that this one had me jumping for joy. Yeah, I can’t even voice my tirade here. Suffice to say that I see a lot of weakness, but I wasn’t certain how to begin to portray that in a single drawing. I went with weak knees. I think one of the scariest things I see right now is my own loss of strength as I get older. I don’t like it, so I’m starting now to strength myself. No weak knees here.

Several years ago, I was reading a book about character design. The one thing that stuck with me was a point about Disney villains always being angular and having pointed lines while the heros/heroines were always round and full of curves. So now, whenever someone says angular, I always think of Jafar from Aladdin. 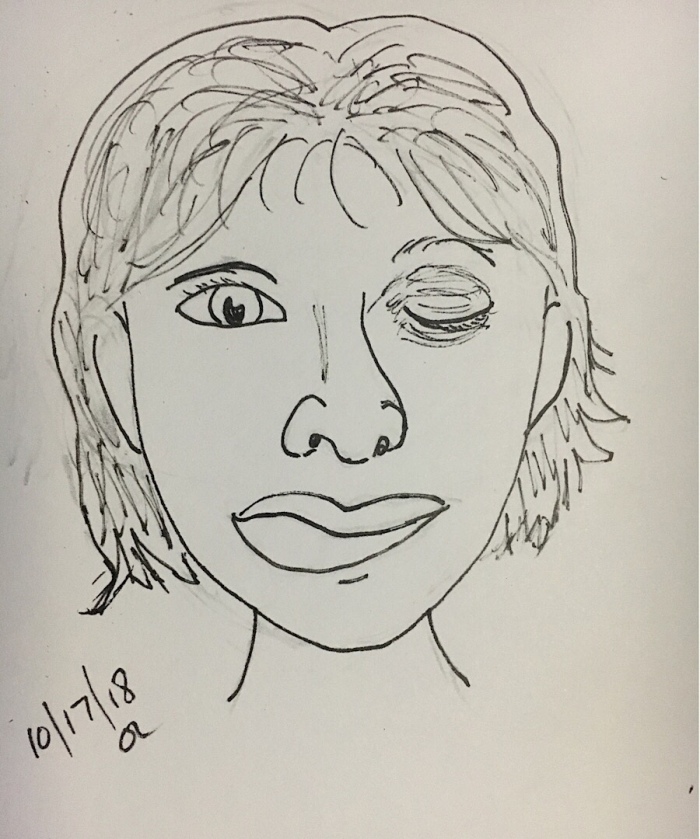 What is this list? Seriously? Swollen? Yeah, I’d give this list a fat lip if I could. *grin* See? More cruelty! It’s rampant I tell you, just rampant!

And, wouldn’t this guy look so much better if someone hadn’t beaten the tar out of him. Yeah, it’s time for humanity to be better. Unfortunately I know that starts with people wanting to be better, which is just “too much work” for some people.

At least I’m over halfway through. I’ve learned a lot and gained some confidence along the way. Hurrah! I guess it is serving it’s purpose.