Not too long ago, I showed a picture from my sketchbook of the main character of my Sacred Knight series, Steigan.

A few nights ago I was flipping through my sketchbook again and came across a picture that reminds me of Ithanes. Ah, Ithanes!

He doesn’t come into the story until book 2, Manifest the Magic, but he was so full of surprises for me. I’ve come to utterly adore him. He’s like the king of snark, and very powerful with his magic. He knows what he’s good at, and lets people follow their strengths. He’s a good leader in that he finds people to compensate for the areas where he is weak. I think that’s why he likes Steigan so much. Yet, he also doesn’t often show weakness in himself. He’s lord of two lands, Dubinshire and Gohaldinest, and he lets everyone know it. Don’t let him fool you, though. He does have his deep, dark secrets.

And speaking of which, I so want to look through that curio cabinet he keeps locked in his chambers. In book 3, To Birth a Destiny, the reader gets to see that curio a couple of times and Steigan even describes some of what he saw. But let me tell you, I was right there when Steigan was discussing what he was seeing and he certainly didn’t get to some of the more interesting items toward the back. Some day I’d like to draw that cabinet and all the trinkets in there. I’d also love to sit down and talk to Ithanes about how he collected all of them. Oh, the stories!

This sketch was done in 2018. I do think if I’d intended it to be Ithanes, it should have had a teardrop-shaped gemstone hanging from the circlet. Maybe I just needed practice drawing a circlet, even a wiry one. (grin)

Maybe someday I’ll get around to doing an illustrated Sacred Knight edition, or maybe even a graphic novel. Someday.

Sometimes I like to go back through my sketchbook. I find interesting things.

Here’s a partially inked picture of *shock* Steigan. I use to draw him more than anything else. Not so much these days, but every now and then he pops up.

You can see that it’s over 2 years old.

More interesting is that on the next page, I found this statement that I wrote:

His eyes are older,

Yet they still mock me.

Temptation leave me be.

I am an idiot.

My heart grows none the wiser.

Just have to say, “Say what?” I found this to be a completely odd statement in my journal. Who the heck was I talking about? Was it just words that popped into my head? I have lines that do that sometimes, but I generally write them down in an idea file, not in my sketchbook. This makes me think I was actually referring to someone. Besides, words like “I am an idiot” don’t usually fill the snippets that land in my head; that also feels more like me talking in my head.

Since this was also dated around 2017 and there is absolutely no clue as to what I was thinking about on that day, I guess this will fall off into the mysteries of mankind. The world will never know what adventure I was on that day which led me to write these words.

Oh, and it’s more proof that I am no poet. But I do enjoy it when my past self leaves my future self some tantalizing mysteries.

It’s been awhile since I posted something for my art, so I thought I’d put up a newer ACEO I’ve done.

I currently have this card and some other new ACEO’s listed on ebay. 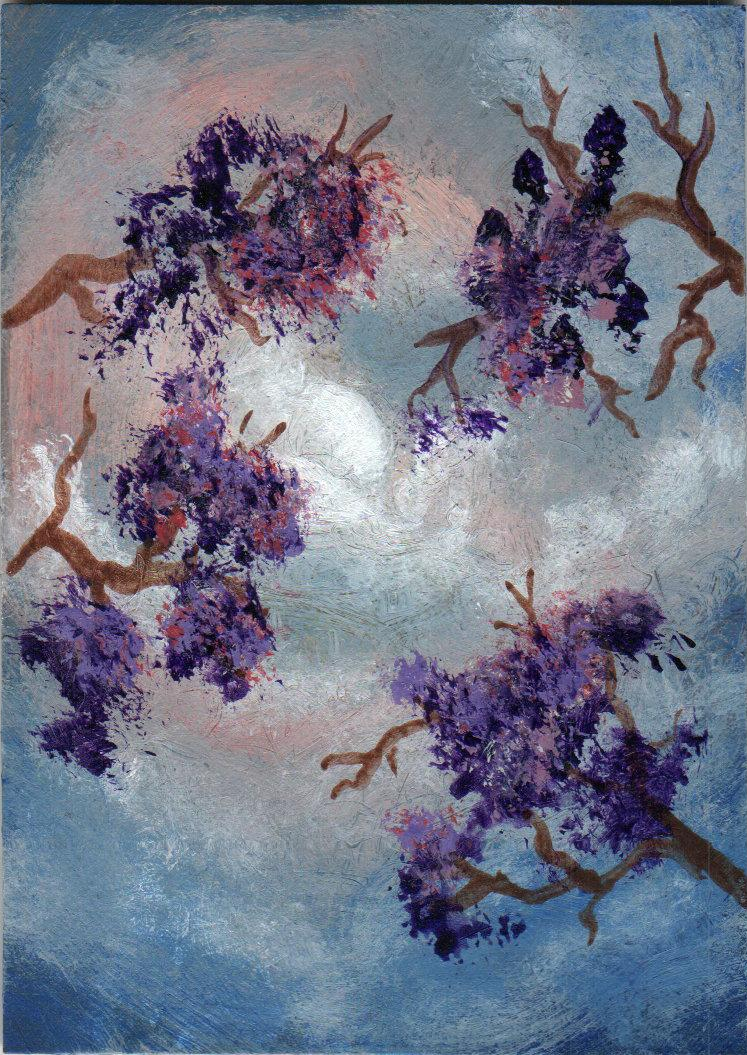 After my post earlier this week about the seasons changing way too soon, I thought I’d lighten it up a bit by bringing in some spring. The seasons do not rule my painting!

I’ve had many people admire my purple trees. I don’t know why I like to paint them; they are just fun. So, here’s another purple tree that is available. I imagine myself lying on the ground looking up through the branches of this tree and watching the clouds float by.

If you wish this little lovely to be yours, check out my auction on ebay going on now.

Send shivers down your spine. Come on up to the house to see what treats we have.

Or maybe we only have tricks.

I painted this ACEO back in 2016, but I never got around to listing it. It would pop its head up at me every now and again — it seemed to float around my office waiting for me to finish and catalog it. I finally got it done this summer. Now, I’m so excited to finally get around to listing it on ebay.

If you’re willing to venture up to the house to see if it’s tricks or treats, check out my auction going on now on ebay.

In the meanwhile, I hope to get more Halloween ACEO’s prepared this year. We’ll see how that goes, since the last one took me 3 years to complete. (grin)

I noticed the leaves on the trees starting to change color in the middle of August. Some people told me I was crazy, even as I was pointing to the yellow leaves on the trees. Per our calendar, we have made the transition to fall, yet some areas of Idaho are going to get snow (or have snow on them). Isn’t that winter weather?

Let’s face it: the seasons do not fit into the nice calendar we have designed. The seasons do what they wish to do rather than following the desires of humans. We try so hard to control things, yet nature will follow her own rhythms. Humans: we’re so cute, we’re just not very bright.

I would have to say that today’s ACEO is inspired by this early arrival of fall. There are flowers, yet the leaves are already starting to turn yellow.

If you wish this little lovely to be yours, check out my auction on ebay going on now.

This weekend I will be out at the Thousand Springs Festival of Art. I have a few new pieces I’ve done since Twin Falls Art in the Park, as well as new ACEO’s. I also have a few new magnets. I completely sold out of the magnets I had on hand at FanX. I haven’t even had a chance to show off of talk about the magnets I’ve been painting yet.

Since I haven’t shown any painting for a while, here are a couple of the new magnets I have for Thousand Springs.

The picture of this one was taken after I had varnished it. I forgot to do it beforehand. This one is before being varnished:

I also have replenished my supply of blank note cards and they are now individually wrapped. Who wants to fold and bag 300 new cards? Yeah, that’s what I thought.

Okay, well, let’s get you to the story.